Imtex Controls were privileged to be asked by the MOD to provide Camtorc actuators to the Royal Navy Aircraft Carriers, HMS Queen Elizabeth and HMS Prince of Wales.

We supplied the Hydraulic A Type Single Shot Camtorc Actuators, which were used in the Automatic Fire Suppressant System on both ships.

The ships which cost £3.1bn each are the largest and most advanced warships ever built for the navy and they both carry a minimum crew of around 700, increasing to around 1,600 with aircraft onboard.

The Royal Navy’s two giant aircraft carriers have docked together, stern to bow, for the first time at their home base of Portsmouth. HMS Queen Elizabeth arrived at the naval base following a three-month deployment to the USA for test flights of its F-35B Lightning jets.

The 65,000-tonne warship manoeuvred into place alongside its sister ship, HMS Prince of Wales shortly after 10:40 GMT yesterday (5th December 2019).

The two 919ft (280m) long aircraft carriers are expected to be in service for the next 50 years. 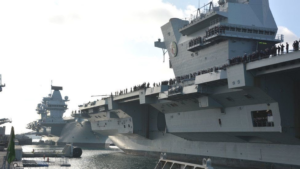 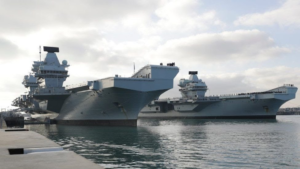