The Abu Dhabi International Petroleum Exhibition and Conference (ADIPEC) is one of the world’s biggest trade shows for the oil and gas sector. A strong delegation of 21 Welsh companies, including Imtex Controls attended the 2019 event, showcasing their innovation and expertise to the world.

We were very proud to visit the ADIPEC conference with the Welsh Government Trade Mission in order to network with key players in the energy sector, foster valuable contacts and find new export markets in the Middle East and elsewhere for our products and services.

Since its foundation in 1984, ADIPEC has grown into an industry forum that attracts government ministers, policy formers, CEOs and global business leaders. Between November 11 and 14, more than 145,000 trade visitors are expected at the Abu Dhabi National Exhibition Centre, where around 2,200 companies will be exhibiting. Meanwhile, some 10,400 delegates will take part in over 160 conference sessions.

Over the past two decades, Wales has strengthened its trade links with Abu Dhabi and the rest of the United Arab Emirates. The Welsh Government has had a permanent base in the country since 2004, when it opened an office at the British Embassy in Dubai. Its remit is to promote Wales and represent the nation’s trade interests within the Emirates and across the whole MENA (Middle East and North Africa) region.

The UAE remains an extremely attractive market for Welsh companies keen to do more business overseas, thanks to its liberal trade regime and its strategic location. It makes an excellent base for trading with other Gulf Cooperation Council nations, and is an important market for re-export to other countries, thanks to its low import duties.

In 2018, the UAE was Wales’ seventh-largest export destination (a total of £498million) and second only to the USA out of all non-EU markets. It is currently the UK’s largest civil export market in the Middle East and its third-largest market outside Europe. In 2018, exports to the Emirates from all parts of the United Kingdom were worth more than £10.5billion, and the UK achieved a trade surplus of over £4billion with the UAE.

Thanks again to the Welsh Government for allowing us to attend this prestigious conference and extend our exporting capabilities within this area. 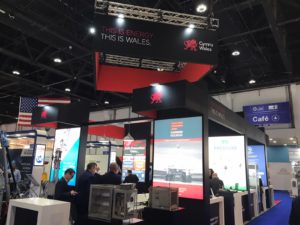